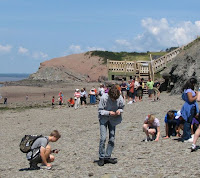 A highlight of any Bay of Fundy vacation is a trip to the Joggins Fossil Cliffs.  This area, designated a UNESCO World Natural Heritage site, has been one of the most important areas for fossil discoveries in the world, and is a "must explore" for any bay vacation.

The natural history of the region (long ago this was a biologically rich and diverse swamp), combined with the constant erosion due to the Fundy tides, result in a particularly rich area for fossil discovery.  Interestingly, at the times the fossils were formed (about 315 million years ago), this area was near the Earth's equator.  The swamp was bounded by mountains on each side, which contributed to the biological richness.  The fossil finds here are righ in tree, fern and amphibian and reptile fossils.  As the document naming it a UNESCO site said "The classic coastal section at Joggins, Nova Scotia, is of outstanding universal value. It contains an unrivalled fossil record preserved in its environmental context, which represents the finest example in the world of the terrestrial tropical environment and ecosystems of the Pennsylvanian 'Coal Age' of the Earth's history."

While the scientific value of the area has been  scientifically studied for more than one hundred years, it is only recently that a full interpretive centre has been established.  Plan on at least several hours here, and try to time your visit so that tide will be relatively low.  It is surprisingly easy to find fossils here after a bit of guidance, and almost every one will find at least one along the beach (this is a protected area and all fossils must remain on the beach).  I have visited with groups several times, and the staff are superb.  One interesting aspect is that the centre is a research as well as educational operation, with various ongoing scientific studies.

The interpretive centre includes static and dynamic displays, and cover the geological, scientific, historical and cultural importance of the area.  This area was once a rich coal mining area, and the history of that industry in the village is well covered.  The interpretive centre, which features green technology, has a lunch room and gift shop at the site. It is open from late April until end of October each year (check their website for hours of operation).   It is well off the major highways, so make sure you are clear on driving directions.
Posted by Dr. Robert Hawkes at 10:31 AM

Get New Postings by Email

Check back for future postings on:
*Where are the tides the highest?
*Apps for the Bay of Fundy.
*Seeing the Fundy region without a car.
*Covered Bridges of New Brunswick.
*The Bay of Fundy for kids.
*What causes a tidal bore?
Suggestions? Drop us a note!