It was announced yesterday that New Brunswick was rated the top international location in terms of environment for the mining industry. While readers will undoubtedly have different reactions, one might be surprise, since in the southern half of the province, with the exception of the potash mines in the Sussex area, does not have an obvious current mining presence.  It was not always so, however, and the mining history of the Albert County area is a fascinating story.

Albert County has over the years been home to the mining of precious metals including gold and silver; industrially important materials including lead, zinc, copper, and manganese; building materials including sandstone, gravel, and gypsum; and petroleum products including natural gas, albertite, oil and gas. The mining techniques employed have included conventional underground techniques, open pit, surface collection and a variety of small scale recovery techniques.

The area with the richest and most extensive mining history are the nearby communities of Curryville and Albert Mines.  Although copper and manganese were also mined there, the area is best known for two materials: albertite and gypsum. Albert Mines, and the remains from its mining past, are listed in Canada's Historic Places.  The Albert Mines listing in Canada's Historic Places notes: "Albert Mines was the site of the first commercial extraction of petroleum products anywhere in the world."  Albertite is a shiny black (or occasionally dark brown) crumbly rock that is very rich (more than 50%) in volatile material.  It played a key role in the development of kerosene which replaced whale oil for lighting, and some say that the development helped save whales from extinction.

The photo montage (from the listing in Canada's Historic Places) illustrates Albert Mines at the peak of its mining past and currently.  Now the site has a variety of tailings piles, and the remains of several buildings.

The former government geologist and inventor, Dr. Abraham Gesner (1797-1864) developed a process for making kerosene from bitumen, and is apparently the discoverer of albertite in 1839.  His early experiments found that albertite was best suited for kerosene extraction, and he sought a licence from the government to mine and develop albertite.  While albertite was originally found under uprooted trees, a flood in 1850 revealed a huge deposit in Albert Mines. There was a dispute between Gesner and a rival company who had coal rights in the area and claimed that included albertite.  The feud got so bitter that guns were even drawn at the mine site on at least one location.  The rival company was granted the rights, a court decision viewed in retrospect as incorrect since albertite is distinctly different from coal.  Albertite was aggressively mined from 1854 to 1884 at Albert Mines.

Dr. Abraham Gesner, who was both a medical doctor and a professional geologist,  had a number of other achievements, including starting Canada's first public museum in 1842 (that went on to become the current New Brunswick Museum).  He had a number of links with the Bay of Fundy region, including being born in the Annapolis Valley, being twice shipwrecked early in life, and serving as a physician in the Parrsboro area. The bitter dispute over albertite, and lost court case, cast an unfortunate pall over the latter part of his life.


To visit the location one turns right onto the paved Albert Mines road from Hwy 114 at Edgett's Landing if driving from Moncton towards Fundy National Park.  If driving in the opposite direction, from Fundy towards Moncton, you turn left at Cape Station (this is not well marked but it is the first road after leaving a marsh, a small bridge then a slight rise with hay fields on your right).  If you have reached Hopewell Rocks you have gone too far.  The map shown below will help guide you. 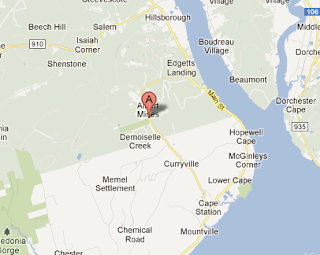 When driving along this road from Fundy toward Moncton, in the community of Curryville, on your left are extensive tailings from the gypsum mining operation.  White gypsum stones are obvious from the road.  As you proceed further, near a church in Albert Mines, and just before the road takes a steep uphill path, there is a side road on the left, and the site of the Albert Mines complex was here.  There are only slight signs of this past, and you may need assistance from local residents in finding the right location.

Some of the best gypsum in the world was mined here in a huge open pit operation (there were other gypsum facilities in the province including one near Hillsborough).  The Curryville gypsum facility was operated from 1854 until 1980.

One of the trails in Fundy National Park, Coppermine, travels near the coast ending at the remnants from an early mine.  There remains only a pile of tailings, and bits from an old boiler.  While you can't remove rocks (or anything) from national parks, if you are lucky you can find a few bits of copper in the tailings (natural copper is greenish, not copper in colour).  Even though the mine remnants are not impressive, the trail is an easy and pleasant walk through interesting forests with a number of foot bridges over tiny streams. There are a few vistas of the coast during the return walk (most of the trail is divided so you return closer to the coast than you travel out). The trail head starts just off the parking lot that is on the opposite side of the road from the Point Wolfe campground.


Those wanting to make a comprehensive stop at the important mining locations within Albert County have a number of other stops to consider.  One location that you will have to view from afar is Grindstone Island.  This was one of the early stone quarry sites in the area, and the location of the lighthouse furthest up the bay. It is a nature preserve, important for bird nesting for a number of species, and is mainly owned by the Sackville parish of the Anglican Church, with the area right around the lighthouse owned by the Government of Canada. You can see Grindstone Island, that is just off the coast from the village of Hillsborough, as you travel along route 114 from Fundy National Park to Moncton.


Something I only learned in researching this column was the manganese mining in the Waterside area, one of my favourite locations (see my other posting on the incredible Waterside Beach).  Apparently the mine was active between and 1875-1877, although I don't know the precise location.  More interestingly, a non-invasive method of manganese extraction was used in the Dawson Settlement area further up the county.  The Virtual Museum exhibit describes the process this way "Bog manganese is not mined but is instead harvested. Underground streams carry manganese up to the surface, the manganese is then deposited at an outlet of the stream on the surface. This manganese then forms into a bog. The manganese harvested from this bog must first be dried before it can be sold." Apparently this was done from about 1897-1901.


Both conventional oil drilling (and natural gas production) and oil shale have been used in Albert County.  Several times in the past decades oil wells in the Weldon and Stoney Creek area (near route 114 between Hillsborough and Riverview) have been operational. In fact by 1925 a total of 66 wells had been drilled in the Stoney Creek area.  Oil shale refers to sedimentary rock rich in shale oil.  Given the larger cost of extraction compared to light oil, it has only been commercially harvested on a limited basis, mainly in Scotland, but that might change with rising prices that might make it economical. Given the current huge debate (a drive through any part of the province will see 'No
Shale Gas' signs) in the province on proposed shale gas production through hydrofracking, it is interesting to consider the province's history in shale petroleum.

There are a number of good sources for additional information online including the Community Memories Virtual Museum exhibit prepared by the Albert County Museum (select the one on Mining in Albert County). As well as comprehensive written descriptions that site includes a number of historical photos. Another good source of information is the listing in Canada's Historic Places.  The NBCC historical resources have a nice section on Dr. Abraham Gesner and also one on Albertite. Of course the Albert County Museum should be a stop on any visit to the Bay of Fundy region.

©R.L. Hawkes. Publications wishing to print this story should contact rhawkes@chignecto.ca for permission.
Posted by Dr. Robert Hawkes at 9:22 AM

Check back for future postings on:
*Where are the tides the highest?
*Apps for the Bay of Fundy.

*Seeing the Fundy region without a car.
*Covered Bridges of New Brunswick.
*The Bay of Fundy for kids.
*What causes a tidal bore?
Suggestions? Drop us a note!